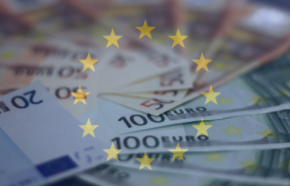 What is the EU Budget?

The annual budgets of the European Union (EU) are regulated by the Multiannual Financial Framework (MFF) – a long-term budget set to plan the application of EU’s money and distribute it among several EU policies in the long-run (five or more years). The 2021-2027 long-term budget has just entered into force and it is the largest in EU’s history. It will provision 1.8 trillion euros of funding to, firstly, help rebuild member states socially and economically, and secondly, build a network of infrastructures that aim at helping younger generations after the pandemic crisis. The long-term EU budget for 2021-2027 differs significantly from the previous one (2014-2020), in part due to the Covid crisis. The EU has created, alongside the MFF, a temporary recovery instrument, NextGenerationEU, to help countries face the economic consequences of the pandemic and lockdowns. This is a 750-billion-euro package financed through common debt.

The Recovery and Resilience Facility (RFF) is responsible for applying most of the funds from the NextGenerationEU programme. It provides financial support for member states to rebuild their economies in the post-pandemic, specifically in green and digital projects. The RFF will support member states by handing out €312.5 billion in grants and €360 billion in loans. The receiving countries will have to negotiate their share of the budget with the EU, which will be allocated following several criteria, such as GDP per capita, unemployment levels and the impact of the pandemic. Before receiving their share of the fund, member states first need to submit their resource allocation plans to be assessed by the European Commission and approved by the European Council.

Besides, the primordial goals of the EU to modernize and digitalize Europe, fight climate change, and give continuity to cohesion policies still dominates a large share of the long-term budget. Horizon Europe (scientific research and innovation programme), the Just Transition Fund (climate transition programme), and the Digital Europe programme, together with the Recovery and Resilience Facility (RFF), account for 50% of the total budget. Policies related to the digital transformation account for 20% of the budget.

Examining the budget by policy areas, this is notably the first budget where new and reinforced priorities have the largest share of the budget (31,9%). These not only include the aforementioned programs like Horizon Europe, Digital Europe, and Just Transition Fund, but also a new EU4Health programme as well as initiatives for young people, like Erasmus+. The Common Agricultural Policy, historically the largest spending area of the Union, maintains its decreasing trend, administration expenses hold steady, and cohesion policies see a small decline.

This budget also includes the largest share ever towards the fight against climate change: 30% of the long-term budget, including the MFF and NextGenerationEU.

To face the common EU debt generated by NextGenerationEU, the European Union intends to establish new sources of revenue, namely a contribution based on non-recycled plastic waste, a new carbon border adjustment mechanism, a digital levy, and the EU Emission Trading System. The Commission will also propose, by 2024, some new source of revenue linked to the corporate sector or financial transactions.

The budget also includes a 5-billion-euro Brexit Adjustment Reserve, to help countries affected by the UK’s exit of EU.

The MFF starts with a proposal by the European Commission, being then discussed by member states on the European Council until there is a unanimous agreement. Lastly, the European Parliament votes to endorse it.

In July 2020, the President of the EU Council, Charles Michel, presented a MFF 2% lower than the initially proposed, two years prior, by the European Commission. To please the ‘Frugal Four’[1], Charles Michel also proposed the rebates maintenance that have allowed the countries who are net contributors to get some of their membership fee back. Previously, the European Commission and the ‘Friends of Cohesion’[2] had attempted to scale back this mechanism.

The “Frugal Four,” led by the Prime-Minister of the Netherlands, Mark Rutte, refused the budget proposed by Michel as it would put the MFF above traditional cap of 1% of the Union’s GNI. These countries believed they should not have to pay for the financial hole left by Brexit.

In May 2020, the European Commission proposed a new MFF with a projected €1.1 trillion in spending for the 2021-2027 period. However, once again, this proposal failed to reach a unanimous agreement in the European Council.

In July 2020, Michel presented a compromised MFF of 1.074 trillion euros, which was lower than both the EU’s Commission proposal and his own proposal from February. He hoped the new reduced MFF would allow for more money to be spent on the EU’s recovery package. This new MFF would be agreed by all member states at the budget summit.

In November 2020, negotiators from the European Parliament and EU ambassadors introduced the Rule of Law mechanism, which would restrict EU countries who do not respect the “EU values” from receiving money from the MFF and from the recovery package. Therefore, both Poland and Hungary are being subjected to EU disciplinary procedures over their governments’ breaches of the rule of law in their countries. For this reason, these two member states threatened to veto the EU budget previously if this mechanism was not dropped.

In early December 2020, both Hungary and Poland agreed to the rule of law mechanism imposed by the European Parliament. However, the EU Commission will refrain from using it until the European Court of Justice has decided if it is legal, which could delay its implementation by many years. The new mechanism would also only be applicable to funds from the MFF 2021-2027 and the recovery package, but not for “for projects committed to under the current budgetary framework”. Lastly, in the case where a member state is facing penalties under this new mechanism, the European Council commits itself to apply it in a fair manner.

On December 16th 2020, with 548 votes in favour, 88 against, and 66 abstentions, the European Parliament approved the MFF, along with the Rule of Law Mechanism. These documents will set up the course of the European economy and EU’s finances, for the next seven years.