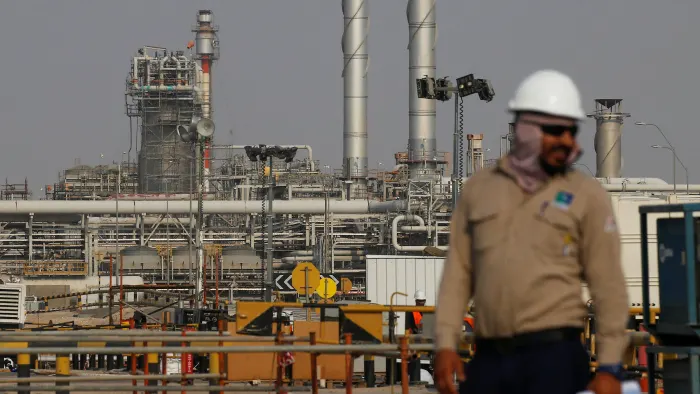 Oil, a three-letter word that embodies the most important source of energy since the 1950s, the lifeblood of modern societies. As the main energy supply, this commodity reshaped not only the power industry, but also how we live, supplying 40% of the world’s energy demand. Therefore, oil continues to survive the constant attempts to shift energy consumption into more sustainable alternatives based on renewable sources, remaining the most-traded non-financial commodity worldwide. The fact that, nowadays, one cannot imagine a world without crude oil, and its inexistence would lead to a screeching slump in modern societies, increases its value, emphasizing its prominence in the global economy.

The United States, Russia and Saudi Arabia arise as crude oil’s largest producers and, in 2019, jointly produced approximately 33 million barrels per day, 54% of total world production. According to IBISWorld, a leading Business Intelligence company, the oil and gas sector’s revenues amounted to approximately $3.3 trillion last year, and with a 2019 Global GDP of around $87 trillion, the oil and gas drilling sector by itself represents around 3,8% of the world economy. It is evident that the 3 main players in this complex industry compete for the monopoly of one the most profitable markets, but one cannot enter this game without caution, since the oil’s biggest sharks will be ready to counter-attack.

With the world markets slowing down due to the most recent crisis caused by the coronavirus pandemic, demand on crude oil has decreased drastically, as isolation measures have tightened around the world.

The members of the Organization of the Petroleum Exporting Countries (OPEC) and the invited country Russia, gathered in a meeting concerning the market demand on the industry after the virus situation. Russia has been allied with Saudi Arabia and the organization since 2016 with the aim to balance its production levels with other countries and keep prices relatively stable.

In this meeting, Saudi Arabia positioned itself and suggested cutting production levels in order to hedge price decreases during these times. However, Putin’s nation was against the proposed measure as they believed it was too early to cut production, the organization failed to reach an agreement between the parties involved, effectively ending the partnership. Some insist that the country is availing oneself of the Asian demand to increase its market share, others agree that it wants to keep prices low to fight the American shale oil industry, which has been growing in the past years. One thing is certain, Russia is indeed worried about its market share and believes that at the moment it is better to be against the Saudis than opting to cooperate. Saudi Arabia counterstroke, announcing they would increase their production to its highest, almost 13 million barrels per day, as well as price discounts in Europe and the United States.

On the 8th of March, the prices started to tumble and the next day they plummeted more than 30%, the worst loss since 1991, and the Russian currency depreciated to its lowest since 2016. For now, the Saudi-Russian alliance is paused, and the war has begun. The Saudis believe they will be able to sustain profits, as their production costs are very low, while Russia claims the ability to sustain prices between 25$ and 30$ for several years due to its National Wealth Fund. Nevertheless, these countries will now experience a thinner margin, despite gaining some revenues alongside customers. From a game theory perspective, we are assisting a prisoner’s dilemma situation where either party may end up hurt after this move since market share will not necessarily be gained and cooperation would better position themselves.

On the 2nd April, Donald Trump claimed that a deal was expected to be reached soon and that production cuts were already in order after affirming that he talked with the leaders of both countries. This prompted a one-day rally in oil futures of 10%, but neither countries committed to supply cuts and the Russian Government denied the claims made by the US President.

On Sunday, April 5th, Saudi Arabia, Russia and other giant oil producers from OPEC made progress in reaching a deal to stem oil prices, despite the difficulty in arranging a meeting and the continuous exchange of accusations between the two leaders. This deal would also involve the US, as they became the biggest oil producer of the last years since the shale revolution and have a great impact on this industry. Together, the members would be proposed to cut their oil production by 10%, but Donald Trump has shown little willingness to do so. The US has even threatened the use of sanctions and tariffs to push the two countries to solve the conflict.

Energy companies are suffering the most from oil wars and this may have a damaging effect on the credit markets as well, since they have been very active in the bond market in the past decade and investors were always keen to lend more and more. This borrowing was done using junk-rated bonds and it is remarked that these companies account for 11 per cent of the US high-yield market. Being rated BB or lower, these issuers are at higher risks of default and the current oil war aligned with a decreasing global demand may cause further downgrades and raise the costs of borrowing. With such a heavy representation on the junk bond market, this shock may not stop at low-rated debt and even impact “safer” debt.

Investors reacted as they have been adjusting to the coronavirus outbreak and shifted funds for the usual safe havens. On the 9th March, the sharp oil price drop prompted a decrease of 7% in the S&P 500 in the first minutes of trade. This sell-off was accompanied by a raise in the price of gold and related ETFs and an increase in the purchase of US Treasury Bonds, represented by a decrease in the US Treasury yields.

At this stage it is quite unclear to predict any short-term agreement between both parties, however, what is clear is that current prices are bad for producers whilst being well received for consumers. What this means is that, in theory, oil importing countries will benefit from this price decrease, considering that one of their main raw materials used, became drastically cheaper. However, this benefit will obviously not be maximized due to all constraints being imposed by governments worldwide during the COVID-19 pandemic, which, ultimately will make this decrease in prices a small tool to respond to the economic impact caused by the viral disease. Furthermore, not everything is bright for importing countries. Let’s take Portugal as an example, which has Galp, which refines imported Brent oil from Brazil and Angola before selling the final good to retailers, as one of its largest companies. Galp had set an average break-even price of 25 € and is still able to sell at current prices, however, as seen in the last few weeks, its price has been right around that value, even reaching the 21€ quotation. As seen, Portugal is not a producer nor an exporter of the raw material, yet, by having companies in its manufacturing chain like Galp, is still exposed to this war that influences prices worldwide and can lead to lay-offs and even shutdowns.

On the other hand, we have the petroleum exporting countries being harmed by not only the influx of supply as the decrease in demand. Some are being forced to decrease prices while also increasing production, to not lose their market share, while others are considering a step-back in production until prices begin to rise. One example being the case of the US which produces, in mass, Shale Oil, which is more expensive to produce. Also, countries that cannot step-back due to an already unstable financial situation as Venezuela, Ecuador and others third-world countries are being dragged into a fight they just cannot handle, especially considering that, unlike Russia, they do not hold a meaningful foreign exchange reserve to back up these abnormal losses, so, debt defaults are beginning to look a reality.

The markets and investors are not happy having to deal with an oil war and a virus outbreak and, if Russia and Saudi Arabia take long to solve this conflict, Governments and Central Banks may not be able to save world economy.