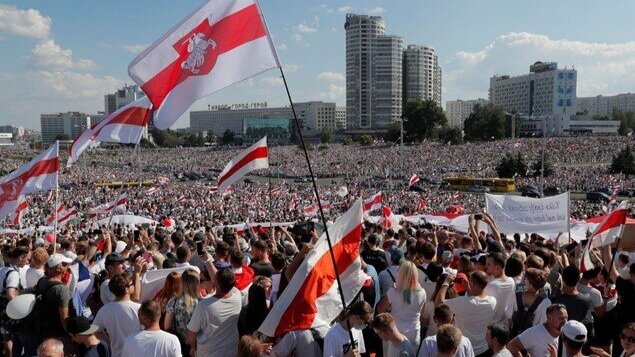 Belarus: rigged elections and a struggle for national identity

Written by Awareness NewsPosted on October 5, 2020January 28, 2021Leave a comment

Looking at footage from the recent protests in Belarus, following the August 9th presidential elections, one observes a wavy sea of red and white flags, instead of the official red and green flag. Understanding this discrepancy in symbols is essential to acknowledge what is happening in Belarus because it illustrates a major factor behind the current crisis: the existence of divergent views on how the future of Belarus should look like.

Before the late 18th century, what is now the territory of Belarus belonged to the Grand Duchy of Lithuania. However, in 1795, after the joint efforts of Prussia, the Habsburg monarchy, and the Russian Empire, the land of modern Belarus was absorbed into the Russian Empire. The Belarrusian state emerged in 1918, only after the Russian monarchy collapsed under the Bolsheviks, and after the Russian forces retreated from the Germans in Minsk, the Belarusian Democratic Republic – or the Belarusian National Republic (BNR) – was created, and independence was declared. Yet, the flags waved by the protesters today are those that were used by the BNR.

However, the Belarusian National Republic was short-lived. Some months later, the government of the BNR[1] was overthrown by Russian Bolshevik forces, and the Belorussian Socialist Soviet Republic (BSSR) arose. In 1921, Belarus was divided in half between Poland and the Bolsheviks and, in 1922, the BSSR became one of the founding members of the Soviet Union. Belarusian intellectuals and national activists faced authoritarianism and political repression in the West by Poland and in the East by the Soviet Union. This, alongside Soviet historic propaganda, stifled the potential development of a Belarusian national identity to a greater extent.

It is no wonder that, in 1991, with the collapse of the Soviet Union, 69% of Belarusians described themselves as “Soviet citizens”, while only 24% identified themselves as “citizens of their republic”.

In 1994, in what is considered the only fair elections of the Belarus’ nation after the collapse of the Soviet Union, Aleksandr Lukashenko was elected the country’s president. Previously to the election, Mr. Lukashenko, a former state farm director, served as chairman of the anti-corruption committee of the Belarusian parliament. Vowing to destroy high-level Belarusian corruption and to forge closer ties with Moscow, he rode on a pro-Soviet sentiment that longed for a Soviet’s golden age as the one experienced in the post-WWII reconstruction period.

In 1995, a referendum held in Belarus altered the national symbols, changing the BNR flag, which was adopted in 1991, to the red and green flag, the one used by the Byelorussian Soviet Socialist Republic. This referendum also increased the power of the president over the legislature and green-lit economic integration with Russia. The Organization for Security and Co-operation in Europe (OSCE) declared that the referendum did not meet the international election standards.

In the following year, 1996, Belarus and Russia founded the Union State, creating a customs union and free-movement area between the two nations. Indeed, the Belarusian economy is extremely dependent on Russia, not only as its main exports and imports’ partner but also due to the energy subsidies[2] which make up a very large part of Belarus’s GDP: around 12% in the last two decades. Due to these ties with Russia and Russia’s support, Lukashenko registers a political advantage.

However, recently, these ties have soured somewhat, with Putin pressuring Lukashenko, on the Union State, by denying Belarus access to previous energy discounts until Belarus commits to deepen the ties between the two nations and to increase the scope of the Union State, something that Lukashenko is reluctant to do.

In 1996, there was another referendum which further increased president Lukashenko’s powers and extended his first term to 2001. Once again, the OSCE stated that it had failed to meet international election standards. The same happened with the 2004 referendum, which removed the president’s two-term limit.

Indeed, every election and referendum since 1994 has been delegitimized by international election fairness organizations, such as the OSCE. They note, among other things, the political suppression and persecution of opposition candidates, the channeling of state-funds to the incumbent’s campaign, the lack of opposition observers at polling stations, strong media bias in favor of the incumbent, among other factors.

Economic stagnation and the protests

However, the dissatisfaction of Belarusians with president Lukashenko is not limited to social and political issues. An economy with a low level of productivity and inefficient state-owned enterprises, associated with a potential hard hit from the Coronavirus’ pandemic are some of the other causes of dissatisfaction with the current president. The Lukashenko government’s blunder of increasing the average salary by printing money, that led to a devaluation of the currency and high levels of inflation in 2011, also left many wishing for change. Furthermore, Lukashenko’s joking dismissal of the pandemic, advising people to go to saunas and to drink vodka to stay healthy, further decreased his popularity.

And so, the population that identified itself as from the Soviet Union, and who gave power to Lukashenko, was now replaced by a younger generation. The Belorusians of today no longer share the fondness for a Soviet Union they never lived in, and they are turning to the streets in giant protests, showing their discontent towards the dictator. Waving the non-Soviet Belarusian flag, 100.000 people gathered in Minsk to protest against political imprisonments of opposition candidates and election rigging. Almost 7,000 people were arrested during the protests and several allegations of torture and human rights abuses.

On the 9th of August, the Central Election Commission announced that Lukashenko won 80% of the vote and was re-elected for his sixth term in office. The opposition candidate, Svetlana Tikhanovskaya, fled the country out of fear of persecution. Not only the EU and the U.S. rejected the election results, but the EU also announced its intentions to impose sanctions on the Belarusian’s government officials.

However, on the 21st of September, Cyprus vetoed the impositions of these sanctions, arguing that penalties against Turkey, relating to the gas conflict in the eastern Mediterranean, should be imposed first. This highlights a major obstacle to the EU’s effectiveness on the world stage, since members are able to veto decisions on important matters to gain leverage on other issues.

Even if the sanctions were levied, skepticism on their effectiveness is still granted, given that almost after every election, since 1996, the EU imposed sanctions on Belarusian officials only to relax them later.

Belarus is a crucial stage for EU-Russia tensions. Putin, so far, has supported Lukashenko because the latter appears to be the best option to keep Belarus close to and dependent on Russia. Given this, Putin has prepared a police force to aid Lukashenko if civil unrest spirals out of control and also provided a loan of $1.5bn. With this, Putin is undoubtedly gaining leverage on Minsk to move forward with Union State integration. Putin’s support for the last dictator of Europe, is bad news for the EU, given its geographical proximity to member-states.

Despite the EU’s ill-timed response, the opposition will continue to grow, and, as Lukashenko is backed by Putin, it is unlikely that the course of Belarus towards democracy is changed.

[1] This BNR government went into exile and still exists as an advocate for Belarusian democracy and as the oldest existing government in exile.

[2] Belarus is able to buy very crude oil from Russia, which it then refines and exports.